Who benefits from the substantial income coming from agricultural exports?

Albanian products and exports have started to grow. Albania is the first country in the region for the production of vegetables and the second, after Serbia, for the production of fruits. The government has projected an increase in agricultural exports to 1 billion 200 million euros. But the high flow of exports is reducing supply in the domestic market, leading to rising prices. But who benefits from this increase in agricultural exports?

A few months ago, the World Food Program (FAO) ranked Albania first in the region for vegetable production and second, after Serbia, for fruit production. Albania in the last two years entered an increasing trend of exports. The government says agricultural exports will be close to one billion euros. During 2020, exports of agricultural products increased by 14%. Tomato products account for the largest share of exports, about 20.7%. Next are the melon and watermelon products, cucumbers, products for which Albania ranks first in the region.

In 2020 Gross Domestic Product increased by only 0.5%, but food exports grew to record highs in the last three decades.
The value reached ALL 39 billion. During the first half of 2021, more than 9 thousand shipments launched for 123 thousand tons of agricultural products.
Despite the expansion of exports, agriculture continues to be the least productive sector of the economy. Specialists estimate that the increase in sales revenue is going more to supply chains than to manufacturers. Producer profits remain low. In the last quarter of 2020, the average gross monthly salary in agriculture was about 32 thousand ALL, or 40% lower than the national average salary.

Who benefits from substantial income of agricultural exports?
RTSH journalist Bardhi Sejdarasi says that from the above indicators it appears that, while exports are growing, producers are coming out at a loss.
According to statistics from the Ministry of Agriculture, there are currently about 350 thousand farms in Albania. A farm is profitable if it generates enough income to employ at least two full-time people on the minimum wage and save aside the investments needed for seeds, fertilizers and other work, which means at least 5,000 euros per year.
Agricultural experts in the country have come to the conclusion that a farm should be at least 3 ha, in the case of vegetables or fruits to produce for the market. According to statistics from the Ministry of Agriculture, only 14% of farms have the potential to be market-oriented for agricultural crops. Almost half of the farms generate between 750 and 3000 euros, a value which is very low. Three-quarters of households generate low income from agriculture, well below the economically viable farm boundary.
Another disadvantage of increased exports, which do not produce enough income for farmers, is the reduction of supply in the domestic market. INSAT data show that during July the prices of vegetables, mainly tomatoes and potatoes, experienced an annual increase of 17 percent. This rate was the highest since February 2019, where the prices of this group increased by 26%. At the peak of domestic production a kilogram of tomatoes is reaching over 100 lek per kilogram from about 50 lek that was at the beginning of the season. In addition to the traders who win, the big losers are the Albanian consumers, not only in price, but also in quality, and especially the farmers. 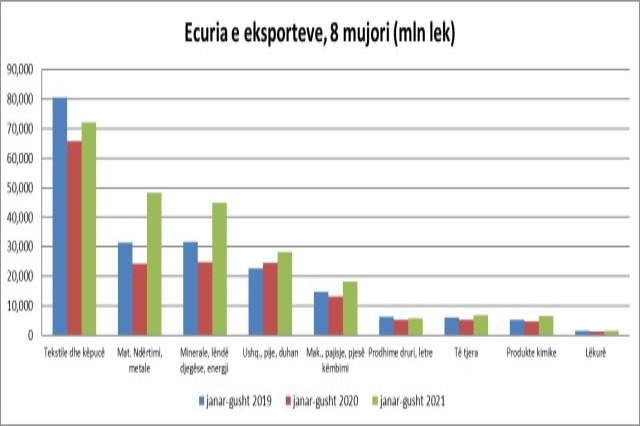